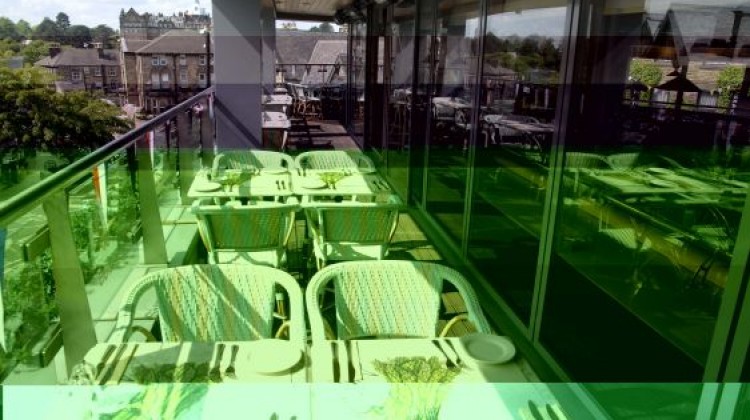 When you climb the stairs at Le Bistrot Pierre you will find gastronomic heaven!

For up in the clouds above the quaint streets of the Montpellier shopping district is Harrogate’s best kept culinary secret. Open the restaurant’s door and you will be blown away by your surroundings. Go further into the bistro it doesn’t take long for you to imagine that you really could be in Paris or any romantic European city.

The long picture windows look over the rooftops and on to its own private heated balcony, the perfect place for cocktails, a romantic glass of champagne – the ultimate place to declare your love or even pop the question on Valentine’s Day.

But it’s not only evenings that Le Bistrot Pierre makes a great dining out experience. It’s also a wonderful place for a long leisurely lunch – would the French do it any other way? – or to catch up with friends, business associates or just to unwind after a session of retail therapy. You can even dine alfresco in warmer weather or blow the budget and book for one of their gourmet dining in nights.

It was just before noon when we had our first experience at Le Bistrot Pierre and well into the late afternoon when we left! It’s a leisurely place but yet one that appreciates people are sometimes time managed and need a quick repast!

Even at noon there were diners in the bistro and as the time progressed it became busier and busier – but with the arrangement of the tables and its general ambience it still retained that spacious and un-rushed feeling and an intimate atmosphere. Both my colleague and I were blown away by the views from our table and the menu. And it took us a while to decide what to order even for starters such was the choice.

We ducked and dived between the A la Carte and the Set Lunch Menu, which as far as set lunch menus goes is one of the best I have seen giving an enormous choice of dishes for each of the three courses.

These are ideal to set off any meal particularly for a special occasion with a cocktail or a glass of wine. The restaurant’s wine list is extensive and very reasonably priced and most wines come by the glass or 500ml carafe as well as by the bottle. We chose a St Jean Vin Rose, Vin de Pays it was dry and refreshing with a hint of raspberries and a touch of spice and made perfect drinking.

For main course as the weather was cold I decided on the roasted tomato and red pepper soup with thyme and crème fraiche but was a little worried that it could be a little too spicy for my taste. But I need not because it was tasty but not overly spiced. However my colleague, a lover of highly spiced food, opted for the Pan-fried fish cake with wilted spinach and Provencal sauce which she declared was very tasty but quite spicy.

For main course she opted for the Les Landes duck leg confit with a cassoulet of smoked bacon, Toulouse sausage and French beans which she declared was totally amazing in flavour, taste and texture.
My choice was the roasted fillet of sea bass with crayfish tails and ratatouille. The fish was perfectly cooked and moist and the accompaniments, especially the delicious ratatouille, which I must confess I normally put to the side of my plate but ate every bit on this occasion, complimented the fish and brought out its flavour.

Portions at the restaurant are generous so we felt it wise to just take in the afternoon sunshine before dessert as we gazed out over the roof tops – and marvelled at just how quiet and far from the maddening crowd of shoppers we seemed.

For dessert my choice of warm red berry macaroon with berry and chocolate filling and ice-cream was simply heaven on a plate whilst my colleague drooled over her dark cherry and almond frangipane with its vanilla crème fraiche and declared she was amazed just how light and flavoursome it was.

As the light of the mid afternoon began to fade there was just time to savour our favourite style of coffee before saying farewell to Bistrot Pierre – well more like au revoir because we will definitely be back again ………now whose birthday is it next?

Bistrot Pierre are hosting a special Valentine’s Day Four Course Dinner £34.95 which includes a glass of sparkling wine. Pre-Booking is essential for this event.

A PIONEER OF THE CLUB SCENE…