DIRTY ROTTEN SCOUNDRELS HEAD TO LEEDS MICHAEL PRAED, NOEL SULLIVAN, CARLEY STENSON AND MARK BENTON STAR Direct from London’s West End, where it ran for a year to rave reviews, packed houses and was nominated for the Olivier Award for Best Choreography, the hit musical DIRTY ROTTEN SCOUNDRELS is coming to Leeds from 30 June […]

Often known as the ‘poor man’s Annie Get Your Gun’ director Nikolai Foster has proved the old adage wrong for his production is colourful, imaginative and moves at a whip-cracking pace. A pared-down low budget production that cleverly uses actor-singer-musicians to add to its rich sound track the way the story unfolds on one set […]

Get the perfect Summer look with the Sassoon Salon, Leeds Team. DESTINATION… Lunch at the beach to sunset drinks. “A classic ponytail gets an ultra-cool update with a touch of texture. To create disheveled texture, spray Wella Professional, Ocean Spritz into dry hair near the roots, then scrunch your hair using your fingers and air-dry,” […]

A leading fashion retailer have launched a hunt for a new generation of curvy British models – flying in the face of the fashion industry’s obsession with super skinny women. Simply Be weighed into the debate by partnering with fashion influencers in an attempt to mobilise women above a size 12 to put themselves forward […]

Following their smash hit success with The Play That Goes Wrong which was at Leeds Grand last year and is now playing to packed houses in the West End, award-winning Mischief Theatre bring their riotous new spin on a timeless favourite to Leeds Grand Theatre next week. The Cornley Polytechnic Drama Society set out to […]

SEARCH FOR A STAR

Gary Barlow and Tim Firth’s new musical THE GIRLS, based on Calendar Girls, opens this November with its world premiere in Leeds and they are looking for a 17 year-old actor to play the son of Miss September; Tommo is described as ‘a great lad – a sportsman, good looking, cocky and girl mad!’ The […]

The Producers is an irreverent musical but a brilliant one. A show that sends up Hitler, gay men, lesbians, actors, accountants and old people could easily be seen as offensive – but the fact The Producers is sparkling, spectacular and above all pure entertainment. The plot revolves around a has been Hollywood producer Max Bialystock […]

The eagerly awaited musical The Bodyguard fired up and literally exploded onto the Alhambra stage using just about every special effects technique in the book. With very little substance in its shallow, inadequate plot and gaps in the storyline that leave many points unexplained it could easily have transcended into a damp squib. But with […]

Chanel’s Sublimage La Protection UV SPF 50 is the ultimate product to invest in for the summer months. This product has more than a sunscreen action it regenerates the skin and has a strong anti-aging element . It’s unique formula shelters skin from damage by ultraviolet rays and the environment and the incredibly light texture […]

I always thought P G Wodehouse novels were reading fodder for red faced retired majors in the smoke filled lst class railway carriages of the fifties, heads submerged in a volume of Wooster and away chortling loudly away at his upper class wit. Wodehouse’s work was certainly not for the younger end, especially the “gals” […] SEQUINS GLITZ AND GLAMOUR COMES TO THE ALHAMBRA A NIGHT OF SONGS AND LAUGHTER BRAND NEW MUSICAL COMES TO THE ALHAMBRA NEXT AUTUMN 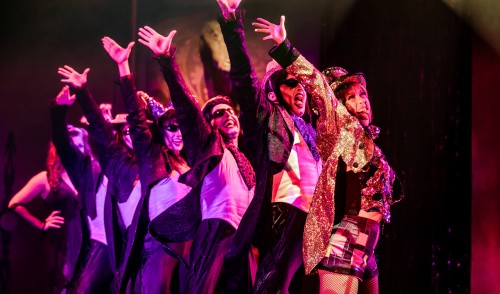 A GREAT PICK ME UP FOR THE SPRING….. AN AMBITIOUS RESTORATION AND IMPROVEMENT PROJECT THE CULINARY MAGIC OF SPAIN